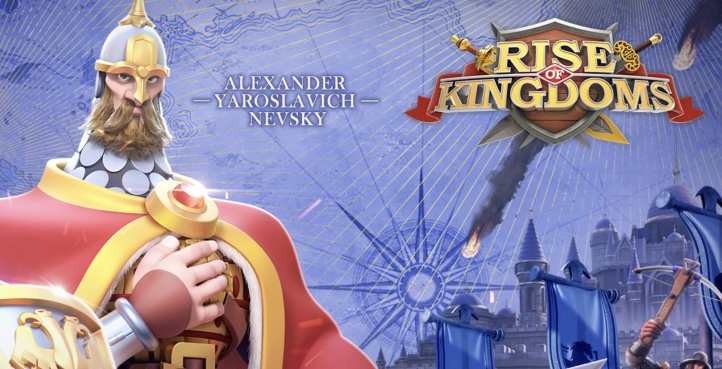 As I said in the beginning, Nevsky is a commander that is good in pretty much all modes on Rise of Kingdoms so it’s hard to actually tie him to a role. He deals massive skill damage, buffs with a ton of stats, has defense reduction that gets stronger when you’re swarming a target and he gets stronger when getting swarmed – basically the full package you can dream of.

See how Alexander Nevsky is ranking in the different game modes of Rise of Kingdoms in my current tier list here.

Here comes the hard part… as Alexander Nevsky’s skill are all good, it’s hard to give a real priority here and it’s more like being that child in the store full of sweets – you simply have a hard time deciding

If I have to put an order here, I’d max out the first two skill simultaneously as the damage factor and the increased stats are just too good. From here go skilly-by-skill or work on the 3rd and 4th skill simultaniously.

I don’t think there’s one single person out there calling you out for maxing Nevsky at all – it’s no mistake and unless there’s any unforeseen balancing happening in the close future, Nevsky will be meta this year for sure.

If you’re going to max him out and have him with his 4th skill unlocked, bringing only cavalry units is vital as the 4th skill only works when there’s only cavalry in your march led by Alexander Nevsky. If you’re starting out working on him you can use a mixed march and only miss out on the defense for other troops than cavalry.

You have a good bunch of pairing options with Alexander Nevsky, for sure. It basically range from glass-cannon that will hit just too hard but can be taken down to a balanced and tanky setup – you will see that range below from left (hitting hard) to right (tanky setups):

Pairing Alexander Nevsky with Xiang Yu is probably the most hard-hitting setup you can go with and, as much as I like what skill damage is happening here, I’d not really recommend it as it is a glasscannon for sure. Xiang Yu provides that rage requirement reduction so Nevsky can cycle through his active skill with the insane damage factor more frequently and overall buffs damage. The only setup where I see this happening well is for rallying. If you’re running Xiang Yu primary, it’s the most damage output but also gets targeted a lot, Nevsky primary will add some more defensive capabilities.

Paired with William, Nevsky also gets some defensive boost but also AoE damage and a debuff and has pretty nice swarming mechanics that compliment Nevsky’s overall kit.

Minamoto is also a very solid pairing with the defense, debuff and damage he provides and bot have this insane single-target skill damage that will just crack open any shell.

Pairing him with Mehmed is probably my favorite setup here, simply for the fact that Mehmed brings extra health and AoE so this is the most complete pairing.

Other possible pairs are Chandragupta with the damage bonus or Saladin for the rage engine that will let Nevsky fire off skills more frequently. Actually, you can bring most commanders that work fine with him but those are the ones that I find useful.

In terms of equipment, here’s what I recommend to use as the route for Alexander Nevsky:

I have three builds here in total that work well with Nevsky – one full Skill, one full Cavalry and one Clarity build. I think it depends on how upgraded you have this commander, what you’re using it for and how you’re using it (pairing) – but the full Skill Build is my favorite one that I see also as the strongest. This build plays around the two big things that make Alexander Nevsky that strong – getting the defense reduction debuff on the enemy active and also roll that high skill damage primary skill – so with this skill build, you will generate a ton of rage and even as there’s a rage cap on how much range you can generate per tick, this one makes sure you’re cycling through Nevsky’s skills as fast as possible.

You want to make it to the Feral Nature talent as quickly as possible and I recommend you to start on the side of Rejuvenate that will get the rage engine rolling. That’s the bread and butter here. From here you can start investing in the Cavalry Tree but make sure you have Feral Nature first before even thinking about any other talent tree.

Alternatively, and this depends on the way how you do your combats in the open field, this build can also be interesting to you. The final talent in the Cavalry tree will give you a massive boost when entering battle but only for the first 15 seconds. And this is where many players wouldn’t go with for the reason that they like to stay in battle and switching targets to not lose rage. If you choose this build with Nevsky, you need to enter battle, leave and enter again to make full use of it. I potentially see the damage output on paper higher if you’re willing to handle your combats like that as you might not exceed the rage cap.

When building this, you still want to go for rejuvenate first to keep the rage engine rolling as you really want Alexander Nevsky to cycle through his skills as fast as possible. From here all-in to the Cavalry Tree.

This is a hybrid build of the two ones above I’ve been experimenting around successfully since the release of Nevsky: The main idea here is to not get the full Cavalry final talent because you want to stay in combat by switching targets so not lose any rage and you switch in Clarity in the Skill Tree because it will give an skill damage boost every time a skill is used – and with the rage you generate with this talent build you will cycle through the skills fast.

Also here, go for Rejuvenate first, the Clarity and then spend the remaining points in the Cavalry Tree.